Brazil ate my toe! [Not for the squeamish]

So I arrived back home and thought, wow – great trip! Nothing bad happened.

That’s about the moment when I should have touched some wood or something, as little did I know, but I’d brought back a little something extra special with me from Brazil, and yes, as the title of this post suggests, it was in my foot.

About a few weeks after being back in Oz, I noticed my foot was damn itchy, and there was this crazy red anger happening in between my big toe and its neighbour – you know, where the flip flop connector bit sits. I decided I must have had tinea or something, so I grabbed the treatments and sat back peacefully to get rid of the itch.

A month later, no change. So I went to the doctor, and he thought some kind of bacterial infection or irritation, so started treatments for that…

Another month later I was back at the doctor, and I said to him that it felt like little tiny things inside me eating their way through my toe. Literally the red lines on my toe would move… albeit very slowly. He said that he’d heard stranger things before! Anyway, it was like painfully itchy, and the lines of redness were slowly traversing my toe. It was like a new vein popping up on my toe, with the line moving every few weeks.

He didn’t have any suggestions at that stage, but gave me a call the next day to say that he thought he knew what it might be. Later that night, he was reading a medical journal and came across a story of a guy who’d been travelling in South Amercia and had symptoms very similar to mine.

So what was this mystery beastie?  Cutaneous larva migrans… (Wiki them later…) Basically they are parasitic larvae that eat flesh, but can only hang around the outer layer, just under the skin.

Anyway, it turns out the medication for treatment is kind of hard to find in Australia. I was going crazy from the itchiness. It was intense – I mean, these little fellas are literally eating away at my toe – about 0.5 mm each day.

Anyway, over the course of a few months, they had made there way from between my two toes, to the far side of my big toe, then finally they came to rest, and by rest I mean die, under my toenail at the base near the cuticle.

The result? One ugly toe… heheh but the good news is that it will be growing out and it looks like there is a fresh nail underneath. Woohoo!

So a warning when travelling… Wear appropriate footwear and cover any cuts you may have even if they are small. Take that extra little bit of care, because there are some crazy ass things out there in the world.

I don’t regret any of my travels for a second. And people sometimes go, Brazil? Why would you? My answer – it’s my favourite place on earth. It comes with its own problems, just as anywhere has, but the people, culture, music, spirit and natural beauty of the place far outweighs any reason not to go. 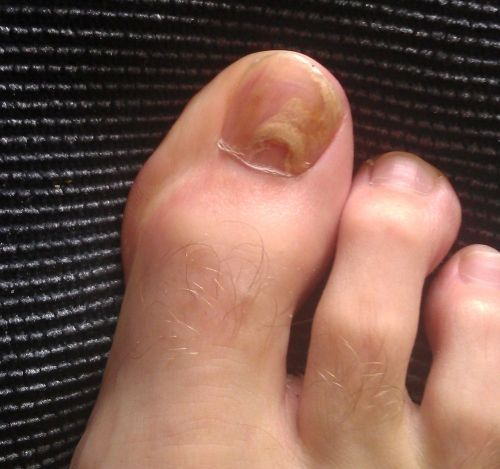