See the full gallery on Posterous

The Museum of the Portuguese Language in Sao Paulo is quite the unique experience. It’s a museum, the only one of its kind in the world it claims which is dedicated to just one language and its history.

Through the interactive exhibits and the cinematic show which ends up with you walking ‘through’ the screen into another room of projection displays.

Another gallery has a wall of continuous video displays more than a hundred metres long, showcasing different aspects of the words relating to Brazilian culture – football, carnival, food, music, history…

I was lucky with my timing at this museum as there was also a temporary exhibit dedicated to my favourite poet, Fernando Pessoa. His poems once translated into English are still fantastic, but in Portuguese they are truly incredible.

He was quite the philosopher who wrote under a number of heteronyms, or assumed characters, which allowed him to explore life from a number of different perspectives and different voices.

Try a few of his poems out for yourself and see if you like them… Personally I think he is among the world’s finest poets.

His collection of short observations about life can be found in English as ‘The Book of Disquiet’. It’s my favourite book. 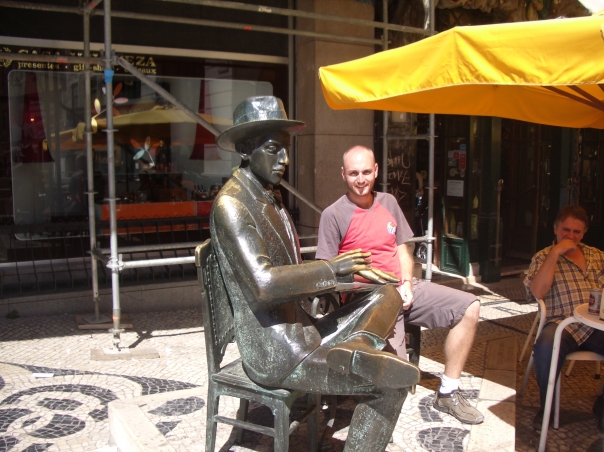 I had to visit Portugal to see the country with its history intertwined so closely with Brazil. And I had a particular fascination with Lisboa because of the poetry of Fernando Pessoa. If you haven’t read any of his works, then at least read the one I have included below. His originals are in portuguese, but this english version does this particular poem justice!

The poet is a faker

Who’s so good at his act

He even fakes the pain

Of pain he feels in fact.

And those who read his words

Will feel in what he wrote

Neither of the pains he has

But just the one they don’t.

And so around its track

This thing called the heart winds,

To entertain our minds.

If I thought that Paris was a great city to explore unplanned on foot, then Lisboa is even more so. Wandering around from ruined cathedrals to city forts perched on the hill, its a historic city with rustic views around every corner without the faster pace of Paris.

For a stimulating read, try Fernando Pessoa’s semi-autobiography, “The Book of Disquiet”. If it doesn’t change your views on a number of topics, then it will at the very least stimulate you into thinking about them.

I ran into fellow backpacker, Gemma, who had spent six months in Brasil and spoke portuguese as well. So we celebrated by nostalgically drinking a few espressos or ‘cafezinhos’ at the famous Cafe do Brasil in central Lisboa. That may have followed with some traditional cachaça testing as well which resulted in the rest of the night being somewhat of a blur…