I Thought this Plane was Non-Smoking?

It was a lovely day to start with, no really, it was. The sun was, apparent, and that’s always a good sign. After a particularly fulfilling Starbuck’s Green Tea Frapuccino it was on to the subway armed with my backpack and a chirpy attitude. 40 minutes later and I was on a shuttle bus to the airport, giddy with excitement as much as with the poor suspension. After all, today, August 2, was the day I was going to New York!

I looked out the airport’s B Terminal windows to see a rather interesting electrical storm approaching. A calm voice gently broke the news that due to the proximity of the storm, no flights would be landing or departing until after the storm had passed.

Hmmmm. An airport wait and I was unprepared with no book to read and no magazine to flick. So I bought a book with my last Canadian money at the bookshop. The book was called “In praise of slow” and it proved to be quite apt or a jinx…

The storm increased and further delays were expected. Huge bolts of lightning were coming down with loud bursts every few minutes but other than that it seemed to just be a fairly typical storm. After a few hours of waiting I was informed that my flight was cancelled. Not delayed… cancelled due to the weather. Have a nice day sir and come back tomorrow!

Ok! No problems I can leave my bag here overnight and just rush through check-in tomorrow – right? No! Due to security reasons my bag could not stay there overnight. Because at the stroke of midnight my already secured and thoroughly checked bag may be opened by mischievous elves or hobgoblins who may have anti-American sentiments. I don’t know about the elves but I was having a bit of a case of anti-American-Airlines sentiments after the weak excuse.

Meanwhile, overhead in the thundering skies of Toronto, an Air France plane was attempting to land. Due to the bad weather, the pilot overshot the runway and crashed into a ravine just in front of the busiest highway in Toronto. Every single person got off the plane alive just before it burst into flames which was an absolute miracle.

So it turned out to be a 10 hour wait the first day, followed by an 8 hour wait the next, until this flaked out Aussie made it on to a plane that appeared to be taking off. The first day’s wait passed easier than the second, as the hallucinogenic smell of burning plane passed the time with a few conscious dreams.

Check out the Air Crash Investigation episode of this crash.

How to Unfold your Day 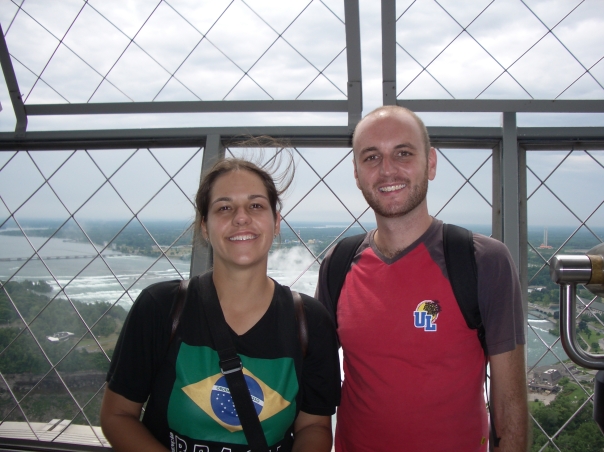 The one thing I have loved about my travels is that aside from knowing exactly which country I will still be in at the end of the day, I have no idea how the end of each day will end.

Previously I had my days and nights pretty nicely programmed so that even though there was room for a little spontaneity, I had a rough idea where and what I’d be doing. Not so with my travels. Unplanning my days and my trip has left me open to some incredible experiences and some new friendships.

One day recently, I ended up downtown in the afternoon for a coffee and ended up chatting with a Jordanian guy, Nadeem, who now lives in Canada. We talked about life in Canada and some of the interesting cultural things to do in the city. He invited another friend, Suhail, to meet me and we all chatted about different things for a while. Afterwards, I was invited to go to see a film by renowned Egyptian director, Youssef Chahine. The film was called “Alexandrie… New York” and was part of the Toronto Arab Film Festival. Although there were mixed reviews from the crowd as many had seen some of his other films, I was left captivated by the story.

The film was so controversial that it was censored in New York. The relationship between the Egyptian director and his American-born son reflects some of the stories of intolerance and rejection of the Arabic community following 9/11 in New York. The irony of the film’s censorship in NYC only adds to the film’s strength.

What a totally unexpected end to my day, but it could easily have been more typical if I had not been in an open frame of mind…

So many opportunities can pass us by because of routine. Routine trains our minds to accept all information from our senses in terms of protocols. I don’t stop and smell the roses on the way to work because routine says I don’t need to. But the rose will always smell nice…

Get out of your routine! Do something crazy and leave yourself open to making a new friend, doing something you wouldn’t normally do or surprise your spouse, friends or family. If you don’t go to bed tonight feeling more alive, then you may need to check your pulse.

Do something crazy or different and then let me know about it! I love hearing from you guys…

It can be something small like going home a different way from work or something big like going to a cafe and trying to strike up a conversation with someone else, surprising someone with a gift or whatever. And tell me about it! Please!